The agriculture sector – the backbone of national economy and a major source of employment – recorded a significant growth of 2.67% in the outgoing fiscal year 2019-20 compared to a poor 0.58% growth in FY19.

The agriculture sector has provided some relief for Pakistan’s economy, which has registered a negative growth for the first time in 68 years. Rice production increased 2.9% to 7.410 million tons and maize crop rose 6% to 7.236 million tons. Cotton harvest fell 6.9% to 9.178 million bales and sugarcane production dropped 0.4% to 66.88 million tons.

Meanwhile, the production of wheat – being the most important crop – recorded a growth of 2.5% to 24.946 million tons.

“This is perhaps for the first time Pakistan is reporting GDP growth in the Economic Survey based on full-year estimates compared to the previous practice of estimates based on nine-month data as the impact of Covid-19 is too significant to be ignored,” he said.

Pakistan’s gross domestic product (GDP) – the size of national economy – is expected to contract for the first time since 1952.

“Looking at the breakdown and their respective weights, we expect the government to revise down agriculture growth for FY20,” said the analyst in a report. 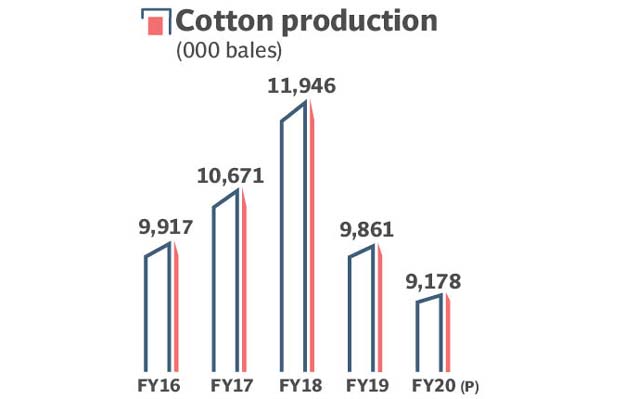 The livestock sector achieved a growth of 2.58%. Meanwhile, the fishing sector grew 0.6% whereas the forestry sector jumped up 2.29%.

Fertiliser production during July-March FY20 rose 5.8% over the same period of last year on the back of additional supply of gas, according to the economic survey. Fertiliser import decreased 20.7%.

The government announced a subsidy of Rs37 billion for the fertiliser sector, however, it failed to release the money in the stipulated time, which resulted in a plunge of around 70% in fertiliser offtake in the last one and a half month, said Mehmood Nawaz Shah, Vice President of the Sindh Abadgar Board.

In the first nine months of FY20, there was an uptick in agricultural credit disbursement as banks disbursed Rs912.2 billion, up 13.3% compared to the disbursement of Rs804.9 billion in the same period of last year, according to the survey.

“Although the growth rate is higher than the last two to three years, overall the growth in the agriculture sector is unimpressive,” said Shah. “Per acre yield in Pakistan is the lowest worldwide,” he added.

After 2005-06, there had been a constant decline in the agriculture sector, which meant the country had a huge untapped potential, he emphasised.

“Commodity prices have not been increased except for the adjustment due to rupee depreciation against the US dollar, which has a grave impact on the return on investment made by farmers; the government needs to look into it,” he said.

The government should announce an encouraging policy for the agriculture sector in the upcoming budget so that the sector could make further progress, remarked Khalid Tawab, former Sindh minister for commerce, trade and industry.